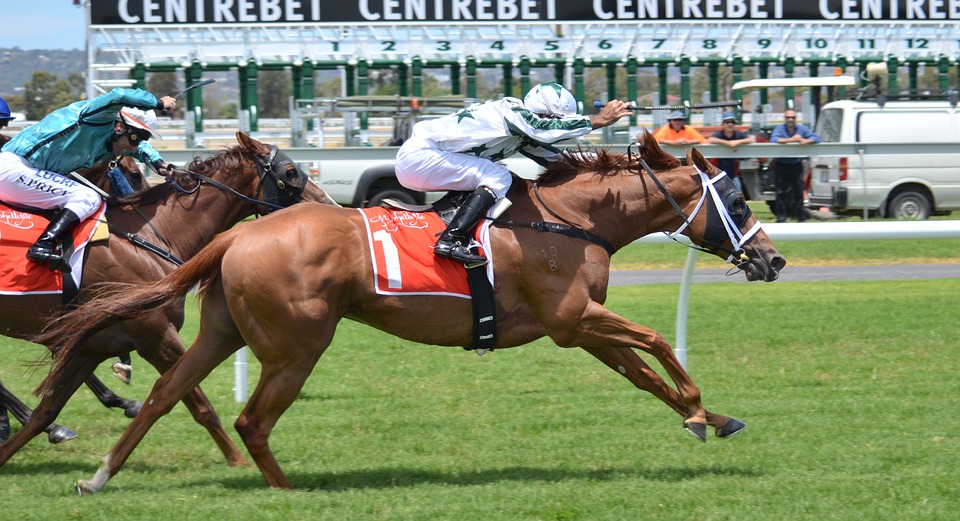 Struggling to get your head around the weird and wonderful world of horseracing? Have a look at our guide to some of the most popular horseracing terminology so you’ll be well prepared for Melbourne Cup Week!

Backed off the map: a rush of bets being placed on a particular horse, suggesting it’s a good chance to win.

Barriers: the starting gates or stalls that horses jump from at the beginning of the race.

Birdcage: not to be confused with the marquee for Victorian Racing Club (VRC) members, this is a part of the racecourse where horses are paraded before they run.

Blinkers: a hood that restricts a horse’s side and rear vision, preventing them from being distracted by excitable horses.

Bookie: slang term for a bookmaker, which is a person that’s licensed by the government to take bets.

Class: the standard or grade of a race.

Colt: a male horse under three years old that is yet to be gelded.

Connections: a horse’s owners and their representatives, or people who are otherwise personally connected to a horse such as the jockey or training staff.

Correct weight: after a race, the jockey’s weight is checked to ensure that the horse was carrying the correct amount of weight. Correct weight signals to stewards that the race placings are official and bookies can begin to pay out any winnings from the race.

Dead heat: two or more horses crossing the finishing post at the exact same time. If a dead heat occurs, the odds of a horse are split up equally to pay the winners evenly.

Each way: to put an equal amount of money on a horse for both a win and a place.

Ears pricked: a horse is either focused and aware in the birdcage, or still has more energy to give at the end of the race.

Feature race: the most important race of the day. It’s often determined by classification, ratings of the fields and the amount of prizemoney on offer.

Fixed odds: a bet where the odds are predetermined, so you’ll be paid out at those odds if your horse wins.

Fluctuations: the odds of a horse that continually move up and down in the betting market.

Hoop: another name for a jockey.

Lame: if your horse pulls up lame, it means that they’re moving abnormally due to pain or injury.

Late scratching: a horse that’s been withdrawn from the race after 8am on race day.

Long shot: a horse that’s paying big odds and not likely to win the race.

Maiden: a horse that is yet to win a race.

Mudlark: a horse that races best on wet tracks.

Mug punter: someone who is really bad at betting.

Photo finish: a result so close that footage from a finishing post camera is needed to determine the race winner.

Place: when your horse comes in either first, second or third place and you receive a dividend.

Plunge: a sudden rush of bets being placed on a particular horse before the start of a race.

Punter: someone who is placing a bet.

Roughie: a horse with a long betting price and a relatively low chance of winning who may just surprise everyone.

Silks: brightly coloured outfits and hats worn by jockeys in a race.

Spell: when a horse has a break from racing for more than 90 days.

Sprint race: anything up to 1200m in length.

Stallion: a male horse used for breeding rather than racing.

Stayers: horses who are best suited to longer distance races.

Staying race: a race that’s over 2040m in length – at 3200m, the Melbourne Cup is a fantastic example of a staying race.

Stewards: racing officials who are responsible for imposing and upholding racing rules.

Strapper: employee of a horse trainer who grooms and looks after the horse on a daily basis.

Swooper: horse who spends most of the race near the back of the field before running powerfully towards the end of the race.

Toppy: short for topweight, this is the horse that’s carrying the most weight in the field. The toppy wears the No.1 saddlecloth and is often the best runner, as the handicap weight system implies that the better the horse, the more weight they will carry.

Unders: a horse who has odds that are too low in comparison to its chances of winning.